No matter how you eat your OREO®s, the cookie has become famous all over the world. Most people don’t know much OREO® history, so here are a few interesting and curious facts about OREO®s. Sit back, grab an OREO® Ice Cream Cake or an OREO® Ice Cream Roll, and learn about everything OREO®.

1. OREO®s Are Over a Century Old

100 years of OREO®? Time flies when you’re the best cookie ever. In 2012, OREO® celebrated its first centennial. Most of us have never known a world without these delicious cookies, and there’s definitely a reason they have stuck around so long (hint: they’re too delicious to pass up). No wonder it feels like these cookies have been around forever!

2. The First OREO®s Were Lemon Meringue

Why didn’t they just start with Double Stuf? We may never know. But, did you know that OREO® used to come in lemon meringue? When the OREO® first debuted, it came in both classic and lemon meringue flavors. As you probably suspected, the classic cream filling was far more popular. The lemon meringue cookie was discontinued in 1920.

OREO®s end up in cupboards and pantries almost as quickly as stores can stock them. In fact, it is estimated that people have enjoyed over 500 billion OREO® cookies around the world since their original release in 1912. Yeah. 500 billion. How many do you think you’ve contributed to that count?

5. OREO®s Have Their Own Holiday

National OREO® Day is March 6. Yes, OREO®s have their own holiday. Be sure to stock up on OREO® Ice Cream Cakes and celebrate.(Yes, they should get their own month. We agree.)

6. OREO®s Come in Different Flavors Around the World

Going on a trip? Fear not. OREO® will be there. OREO®s may seem distinctly American, but they’re not limited to the United States, or even to North America. OREO®s are sold in more than 100 countries. Some countries even enjoy wild flavors that you can’t typically find in the USA. In China, you can buy green tea OREO®s. If you visit Argentina, try a dulce de leche and banana combination OREO®. Orange ice cream flavored OREO®s are available in Indonesia.

96% of Americans eat ice cream, and Cookies n’ Cream is the fourth most popular flavor. In the lead? Chocolate in first place, followed by vanilla in second place and, shockingly, butter pecan in third.

10. No One Remembers How OREO® Got Its Name

Most of us can’t remember the name of the person we met 2 days ago. So, it’s no surprise that no one remembers the origin of the cookie’s distinctive name in 1912. 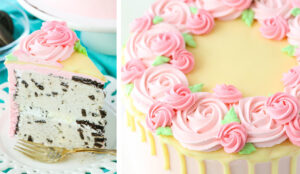 The mothers in your life deserve a special treat this Mother’s Day and there’s no better treat than an ice cream cake. Ice cream cakes are delicious, easy to serve,… 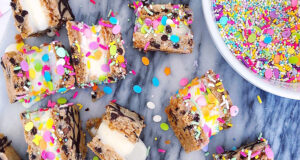 Summer is a fantastic time for parties: the kids are out of school, the weather is warm, and everything feels a little more relaxed. Planning a summer party does not… 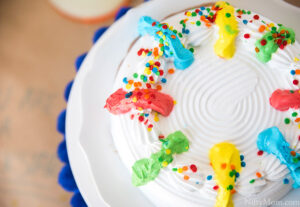 How To Dress Up a Cake Stand

To make the celebration more than just dessert, Nifty Mom shares easy ways to dress up a cake stand and make a simple setup more special. 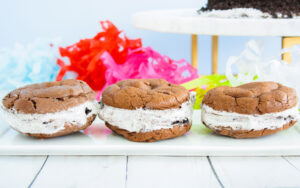 What to do with leftover ice cream cake? Whip up this easy summer recipe for Mocha OREO® Ice Cream Sandwiches from Elle Talk. These no-chill cookies are crisp on the outside…