While Carvel has been synonymous with great ice cream cake for decades, not many people know Carvel started in an ice cream truck on a humble $15 loan to get the business up and running. Here are 5 more Carvel Ice Cream Cake facts that you may not know:

1. Carvel Started from a $15 Investment

Tom Carvel borrowed $15 to buy an ice cream truck when he was only 28 years old. Funnily enough, the lovely person who loaned him the money was a woman named Agnes, who later became his wife. The year was 1929, and it’s unknown whether or not Tom ever paid Agnes that $15 back. Either way, we think it was a wise investment.

While out delivering ice cream, Carvel got a flat tire and was forced to pull over into a parking lot near a pottery store. As his ice cream began to melt, he decided to sell it to locals passing by so it wouldn’t go to waste. As it turned out, people loved the softer ice cream. In fact, they loved it so much that he sold his entire inventory in two days! With this realization, he eventually created and patented his own freezer to make softer ice cream, and eventually, delicious ice cream cake.

3. The First Shop was Built Where Carvel’s Truck Broke Down

Eight years after he bought his truck, Carvel managed to build his first shop. Ironically, Carvel ended up purchasing and converting the same pottery store he parked next to all those years before.

4. Their Most Famous Ice Cream Cake is Iconic

Fudgie the Whale is an icon, and easily most famous Carvel creation. The story goes that they were trying to take a picture of a whale cake to use for some advertising, but the tail wouldn’t stay attached. Improvising, they covered it in fudge icing to keep the tail in place. The new ingredient helped keep the appendage in place, but it ultimately became the defining trait of this mouth-watering ice cream cake.

As a company, Carvel has a place in the Guinness Book of World Records for having broken two records. They hold the record for the largest ice cream scoop pyramid as well as the largest ice cream cake. Those in attendance for the events got to indulge in delicious record-breaking goodness.

Love Carvel Ice Cream Cake? Here is a coupon for $3 off!

Back to School Party Ideas

Back to school can be a bumpy time for kids missing summer. Get things back on track by throwing an effortless back-to-school party to get the family excited and ready for… 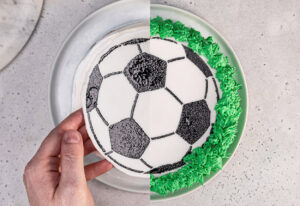 How to make a DIY soccer ball ice cream cake

We’re about to show you how to make a soccer ball cake out of a Carvel Happy Birthday Ice Cream Cake. Find the full tutorial on our site. 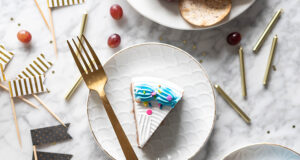 When it's time to entertain, the first step is deciding on the menu - what food, drinks, and sweets to serve. From holidays to birthdays to weekend parties, these no-fail…

Use a round Carvel Ice Cream Cake as the base for this rainbow freak cake, glazed with a rainbow white chocolate drip and a variety of colorful candy toppings.